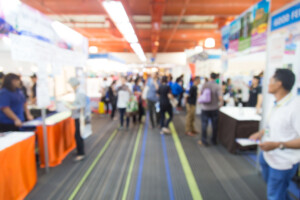 Trade shows can be great ways to attract positive attention towards your company, all while selling a product or service. However, figuring out the best way to run a trade show booth isn’t always easy.

If you want to know how to get more booth attendees and make more sales, read on for some easy, actionable trade show ideas to boost your booth’s effectiveness.

Do you know over 72% of American adults admit to using some kind of social media? Companies can’t afford to waste the opportunity to use such a wide-reaching format for advertising. If you want the best trade show booth showing possible, you need to build up hype before going. You want people planning to go to the show to have time to process your booth will be there and develop a plan to visit it during their trip. Make your announcement to sound fun and exciting. Try and convince people it’s now or never to see something cool your company will do.

If this sounds like a pretty common advertising approach, that’s because it is. Making your booth out to be something people won’t want to miss is effective. That’s why companies do it. You don’t have to feel bad either, as it is objectively true fans of your company will miss an opportunity if you don’t go. Most companies don’t run booths very often and often offer special deals when they do. This strategy can also be supplemented with an email marketing campaign meant to do much the same thing. You can email people about the event, driving hype for it.

Idea #2: Get an Industry Influencer Involved

Industry influencers can be great for pre-show marketing, but they can also be good when the event comes around. Even if they’re not at your booth the whole time, just an appearance can help your numbers. If you can manage to pay or otherwise convince a respected, known figure in your industry to show up at your booth, it can be great for optics. It helps give your booth a sense of real value and professionalism.

For newer companies with less known names, getting a known powerhouse to associate with you can really improve your image. It’s even better if their appearance can feel natural, rather than like a paid advertisement. This is why networking is so important in business. These sorts of appearances are easiest to obtain over time by building a relationship with big names and demonstrating your company is both friendly and innovative. While many guest appearances are paid, not all are going to be. You may be able to work out a deal with an industry influencer or, if you have a really strong relationship, they may even help you out as a favor.

So far, we’ve mentioned some standard, effective ways to attract attention to your trade booth. For this idea, we’ve decided to bring up a strategy with a bit more risk but has the potential for a serious reward. People love mystery. It fascinates us and, done right, can be an effective marketing technique. If your pre-show marketing and maybe even the booth itself give an aura of mystique and strangeness, people will want to know more. However, we have to recommend you go beyond the promise of telling people a “secret” and calling it a day. This can backfire; promising secrets only really pays off if you have a huge revelation to give.

Why not silhouette an upcoming product in your ads, promising an early reveal at your booth? Or developing a fun ARG people can solve for an amazing deal or exclusive item? With only some basic graphic design or programming skills combined with creativity, you can build up your booth as something unique. The more fun people can have trying to guess what you’re up to, the better. Keep in mind, however, that this is hard to repeat. If you do the same sort of mystery show after show, the strange and unique feel of what you’re doing can fade. If you intend to stay mysterious, you’ll need to try multiple approaches.

After the risky idea above, we’ll swing in the opposite direction. This idea is a simple, reliable, but effective one: focus on aesthetics. If your booth looks nice, with solid displays and clearly conveyed information, then people will want to visit it. You want to be approachable without looking too corporate. Too many booths at trade shows look either chaotic or sterile in design. Neither approach is a good one; chaos is often ugly while a sterile, phoned-in look is boring. At the very least, incorporate interesting colors into your display. Try to have objects people can look at with information relevant to your business.

This stuff is simple trade show marketing but that doesn’t mean it isn’t effective. You can also put together a few trade show publications to hand out to guests to better inform them of what you have to offer. If possible, have products available for testing and sale, all labeled by price and purpose. Make it easy for visitors to know what you’re offering and why it’s a good deal. When making a display, keep in mind many people don’t like asking questions. The more you can convey easily without them needing to talk to you, the better.

If you’ve ever seen a brand you like release something “limited-edition” or “exclusive,” then you probably have felt a tug to go out and get it. For better or worse, humans hate missing out on opportunities that interest us. Many companies take advantage of this at trade shows and similar conventions to build hype for their booths. Offering merchandise or deals that are exclusive to the show can do wonders for your numbers.

The downside, of course, is that a company needs to balance the cost of such a strategy. While it’s okay to take a loss at a trade show for potential gain later, getting exclusive merchandise made can be pricey. It’s worth noting that free exclusive merchandise can often attract huge crowds but then will cost your company even more in the immediate. That doesn’t mean it isn’t worth it; instead, it means you need to be careful. Unless your company has big coffers, the usual approach is pricey exclusive merch is put for sale, and smaller, cheaper exclusive merch is given away. This can allow you the best of both worlds while still building a crowd.

Contests can be a great way to get repeat visitors to your booth. By having people sign up for a random raffle or similar event, you can have interested parties visit twice. First to enter, then again to see if they’ve won. There are many ways to run a contest, with perhaps the best being a random raffle with multiple winners. This way, people think they have a good chance of winning without the process getting too complicated for booth runners. If you do run a contest, make sure to keep in line with local gambling laws and show rules. Be careful charging people to enter your contest; it’s often best to make entrance free if you’re unsure about any relevant regulations.

In the past, we’ve discussed how strong trade show marketing embraces change. Often the best booth ideas are those that are innovative, allowing your trade show booth to stand out from the crowd. This is an important tip to keep in mind if you’ve had success in the past, as that success does not guarantee future success. It’s important to keep your ear to the ground and try and catch a change in the wind before it happens. The trap many businesses fall into is having a successful showing at a trade show and then assuming they can continue that strategy ad infinitum. They fail to notice slowly dwindling crowd attention.

Much like in the rest of the business world, trade shows are about keeping up with the times. You want your booth to excite people; the new is almost always more exciting than the old.

Even if your business model isn’t a flashy one, find ways to innovate how you present yourself at trade shows. Combine the ideas above, reinterpret them in new ways, or even invent your own strategies. Evolve and stand out. If you don’t know where to begin, read up on trade show news and ask what people in industries similar to yours are doing. You can start to see the shape of the current market and how to take advantage of its changes.

Use These Trade Show Ideas Well

The great thing about the above trade show ideas is they’re only the beginning. As you master one approach, you can change and alter it to your needs. You can also combine it with another approach, building even more attention.

If you’d like even more help bringing your booth to the next level, we can help. Why not create your own publications, news distributions, and marketing solutions through us? You can also explore our blog for more free info!